Horst Jannsen – Hölderlin Ages 16 and 72. Scanned from a German newspaper several years ago.

A SHORT TIMELINE OF HÖLDERLIN'S LIFE


March 20, 1770 – Born in Lauffen am Neckar, a small village not far from Heidelberg in what was then the Duchy of Württemberg, an area in Southwest Germany also known historically and culturally as Swabia.

1774 – After the death of his father in 1772, his mother re-marries and moves the family further south down the Neckar to the town of Nürtingen.

1776-1788. Education at schools run by the Lutheran ministry in Nürtingen, Denkendorf and Kloster Maulbronn, following his mother’s wish to see him train as a Lutheran minister. 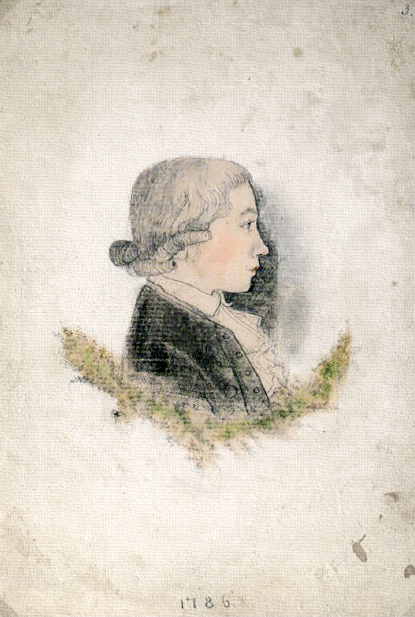 This pencil drawing with coloring added was done in 1786, possibly by a fellow scholar at Maulbronn. His hair has been neatly curled, and the profile of the budding poet rests on laurel branches. He had begun writing poems by age 14. Württembergische Landesbibliothek Stuttgart.

1788-1793.  Student years at the Tübinger Stift, a theological training academy in Tübingen supporting scholarship students in Baden-Württemberg, where among his close friends are Georg Wilhelm Friedrich Hegel, Isaac von Sinclair and Friedrich Wilhelm Schelling.  A supporter of the French Revolution, Hölderlin's republican sympathies influenced many of his later works including Hyperion and The Death of Empedocles. His academic interests centered on contemporary German idealist philosophy and Greek and Roman language and literature. His first poems are published in 1792. He receives a theology degree in 1793, but rejects a career in the ministry and becomes a private tutor (Hauslehrer) to parents of wealthy children, a common form of employment for aspiring writers, which was involuntarily engaged in also by Hegel and Schelling. 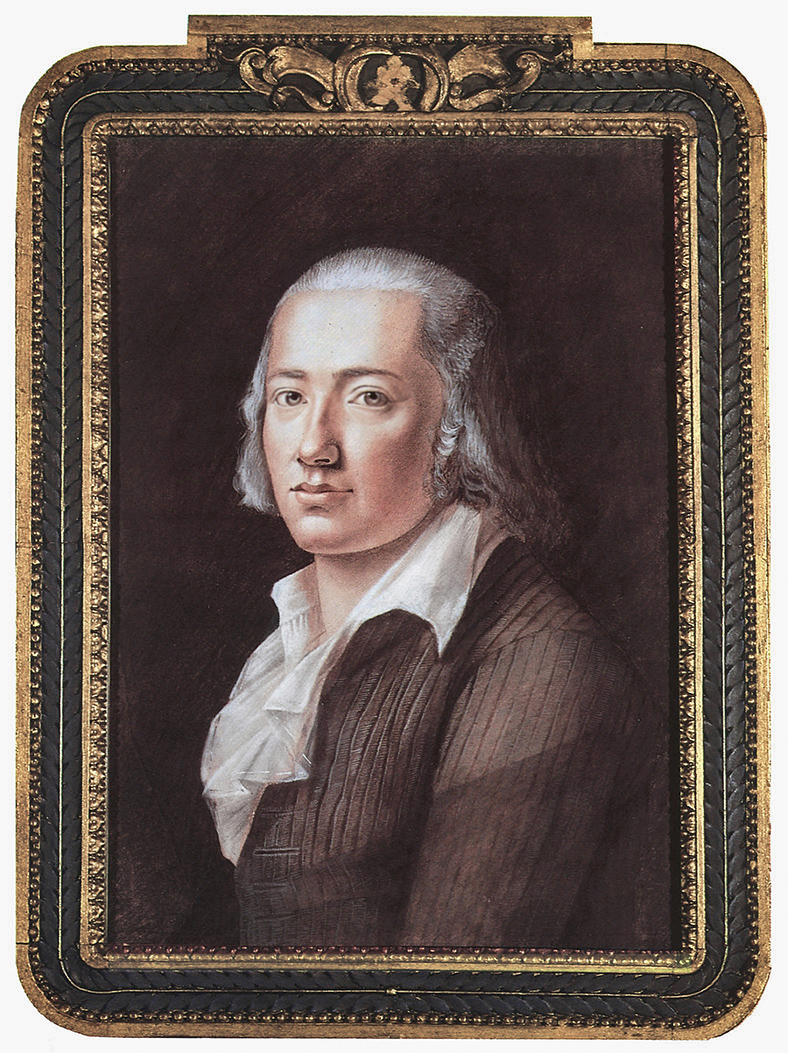 Pastel drawing by Franz Karl Hiemer of the poet at age 22, his hair powdered and wearing a quilted jacket, around the time of receiving his Magister degree from the seminary college in Tübingen. This is the gold standard of Hölderlin portraits and is automatically reproduced almost anywhere his name is mentioned in print. It suffers from the one deficiency that his sister is recorded as saying, perhaps jokingly, that it doesn't look like him. Bildarchiv Preussischer Kulturbesitz.

1793-1795. Travels to Weimar where he meets Schiller, who publishes some of his poems and finds work for him as a tutor for the son of Charlotte von Kalb. He also meets Goethe somewhat obliquely, and later moves to nearby Jena, where he attends lectures by Fichte at the university and also meets Novalis. In June 1795 he leaves Jena for reasons unclear and returns to his mother's home in Nürtingen.

1796-1800. Hölderlin moves in January 1796 to Frankfurt to begin a house tutor position in the home of Jakob Gontard, a wealthy merchant and banker. He falls heavily in love with his employer's wife, Susette Gontard, and is subsequently fired by her husband in September 1798. He moves to Homburg at the invitation of his friend Isaac von Sinclair, where he remains unemployed but very productive with writing projects, before he returns to Nürtingen in June 1800 and then stays with his friend Landauer in Stuttgart.

1800-1801. After a three-month tutoring job in Hauptwil, Switzerland, ends unexpectedly, he comes back to Nürtingen, and writes without success to Schiller asking his assistance in obtaining a Greek lectureship at Jena, and ultimately accepts a house tutoring job in Bordeaux, France, at the home of Daniel Meyer, a wine dealer from Hamburg and the local German consul.

1802-1806. Hölderlin walks to Bordeaux in December 1801 to begin the new job, but returns to Stuttgart a few months later in a state of extreme mental disorder. He is told of Susette Gontard's death from the rubella virus by his friend Sinclair. He soon returns to his mother's home in Nürtingen to work on his Sophocles and Pindar translations. In 1804 Sinclair organizes a position for him as court librarian in Homburg. Despite battling mental illness, this is a period of great productivity for Hölderlin: he publishes "Patmos" for the Landgrave Friedrich V of Hessen-Homburg; a collection called "Night Hymns" (Nachtgesänge) appears which includes his most famous poem, "Half of Life." In 1805 Sinclair is arrested on a bogus charge of treason, and Hölderlin is suspected at first as a co-conspirator. Sinclair is later released and writes to Hölderlin's mother in August 1806 that his "madness has reached a very high level," and he is subsequently brought to the Authenrieth Clinic in Tübingen in September 1806.

1807-1843. Pronounced incurable after treatment in the clinic, Hölderlin was released in May 1807 to the care of a local carpenter, Ernst Zimmer. He resided for 36 years in a small apartment in Zimmer's home overlooking the Neckar River, now called the "Hölderlin-Tower," which includes a small museum open to visitors. Without recovering his sanity, he was still occasionally able to focus his mind sufficiently to write a number of worthwhile poems until his death on June 7, 1843.

Pencil drawing by Louise Keller in 1842, the year before he died. Deutsches Literaturarchiv, Marburg.