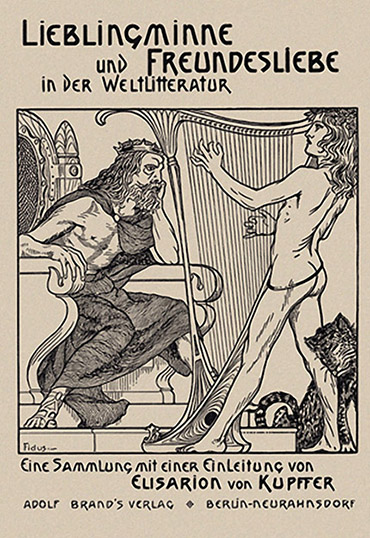 Two poems by Hölderlin were included in what is regarded as the first-ever anthology of gay writing, published in Berlin in 1900. This advertisement appeared on the back of the magazine "Der Eigene", Issue 6/7, October 1899.

No smoking buns have been discovered, but the answer is a definite maybe according to Ursula Brauer's thoroughly researched biography of Hölderlin's closest friend Isaac Sinclair, published 1993 under the auspices of the Hölderlin Society in Germany. Sinclair’s role in the poet’s life can hardly be overestimated, and because he obtained a sinecure for H as a court librarian in Homburg when the rest of H's friends and family had deserted him after returning from Bordeaux in a state of mental distress, it doesn’t seem too much to suggest that the Late Hymns and the "Nightsongs" might never have been written without Sinclair's timely intervention, in accordance with his extraordinary and life-long devotion to his friend.

The two had met during student years in Tübingen and later in Jena, where they were also roommates for a short time. One of H’s major poems The Rhine is dedicated to Sinclair, the conclusion of which memoralizes their common enthusiasm for revolutionary politics.  Since there is a consensus that Sinclair himself was gay, the question next presented itself if H was similarly blessed, and Ursula Brauer is quick to point out that both were unmarried, grew up without fathers, and were uncommonly dedicated to their mothers. But these indicators of an unresolved Oedipus complex revert to a Freudian conception of homosexuality which no longer enjoys general acceptance: it is fair to suggest that contemporary researchers regard homosexuality as a natural variation dependent on biological as well as environmental factors. Other scholars writing after Brauer have gone so far as to suggest that far from embracing homosexuality, H’s fear-if-not-revulsion of it (triggered by hypothetical physical advances made by Sinclair in Jena) proved so extreme that it eventually rendered him schizoid.

H and Sinclair lived at a time when sexual matters were not a matter of public discourse, and the currently popular practice of exercising sexual archaeology upon dead persons seems to violate the same privacy rights that we the living expect from each other.  The frontier zone between homosociality and homosexuality remains as enticingly perplexing as ever, and the implicit assumption we have somehow resolved all sexual issues in our own lives compared to our ancestors because we can now talk about them freely is simply sexism applied to history.

Besides, it’s much more fun to speculate on gay alarm flags in the works themselves, for example in the bromance between Hyperion and Alabanda in the Hyperion novel—"Oh, my Hyperion, I long very much for something large and true, and I hope to find it with you"— (?!!) — or, in the present collection, "To the Sun God" and "Socrates und Alcibiades," translated here.